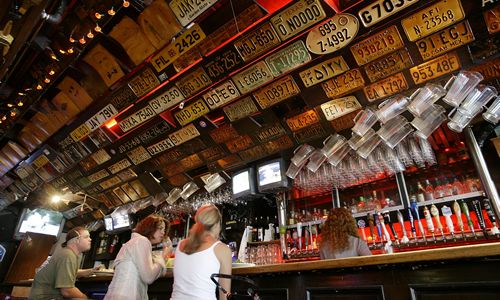 Barney’s Beanery-Redondo Beach (www.barneysbeanery.com), a near replica of the venerable roadhouse/famed celebrity hangout diner and top rated sports bar, has opened just 10 minutes south of LAX on the Historic Redondo Beach Pier. The newly opened restaurant is situated as one the first eateries to greet visitors to the wharf.

“We’re being greeted with cheers from everyone in Redondo Beach who are so glad to see us coming to the South Bay,” said co-owner David Houston. “Redondo Beach is a great sports town and we are happy to provide a fun place for people to eat, drink, and kick back with by watching their favorite sports team.”

Unique to the Beanery’s approach for sports fans is the option to be able to select from 12 different sports channels — essentially selecting which team they want to watch at a set table in the restaurant. “Trojans and Bruins are big here, but if you are a die-hard Hoosier, Tar Heel or a raving Wild Cat, chances are we’ll have your alma mater available for viewing,” said Houston.

The original Beanery — the third oldest restaurant in Los Angeles — has been long known for its history as a favorite watering hole beginning with early glamour day movie idols, including Greta Garbo and Clark Gable, and later counterculture musicians like Jim Morrison, Janis Joplin and Jimi Hendrix. The original West Hollywood venue is still going strong with regulars like Drew Carey, Adam Sandler, Johnny Depp and Quentin Tarantino, and a slew of notables that reads like the nightly guest list of Jimmy Kimmel Live.

To quench thirsts, Barney’s Beanery boasts a choice of close to 200 imported and domestic beers with 50 available on tap. The food, as always, is pure American comfort, with breakfast served at all hours: world famous burgers, pizza, burritos and its claim to fame, “Second Best Chili in Los Angeles”.

The newest venue follows the successes of Beaneries in Westwood Village, Santa Monica’s Third Street Promenade, on Colorado Boulevard in Old Town Pasadena, in Burbank at the Burbank Collection, and the original on Santa Monica Blvd, in West Hollywood.

Barney’s Beanery Redondo Beach is located at 100 Fisherman’s Wharf in Redondo Beach, Calif. The phone number is (424) 275-4820. For more information, visit www.barneysbeanery.com, and follow Barney’s on Twitter, or Facebook.