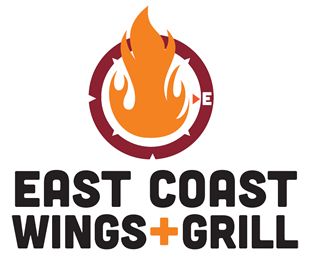 East Coast Wings & Grill has announced plans to enhance the look and feel of its locations. Along with a new logo, the North Carolina based casual family dining restaurant, that’s known for its emphasis on buffalo wings, has completely revamped its store’s interior. To be implemented in all locations not yet under construction, one of the first restaurants to debut the new in-store experience will likely be the franchise’s first location in Lynchburg, Virginia which is slated to open in early 2017.

The new interior gives a nod to what East Coast Wings & Grill is known for: amazing buffalo wings and a diverse menu made from fresh ingredients all offered in a comfortable atmosphere.

“We made a commitment in 2015 to elevate all tools for our franchisees, and the refresh is the last piece in that puzzle,” stated Sam Ballas, CEO of East Coast Wings & Grill “We have elevated every platform in the brand, including On-Line Ordering using OLO, a Loyalty Program through Paytronix and Data Analysis from Buxton. The new logo and updated 2.0 design better represent our brand and are more appealing to our target customers.”

East Coast Wings & Grill will be sharing details of the refresh with prospective franchisees at the 2016 Multi-Unit Franchising Conference (Booth No. 223), taking place April 26-29 in Las Vegas. The company offers multi-unit operators an attractive investment opportunity centered upon unit-level economics to support both operations and expansion. In 2015, East Coast Wings & Grill achieved its 12th consecutive year of positive same store sales, with a 4.1 percent growth in same store sales over 2014.

East Coast Wings & Grill is a fast-growing, casual, family dining franchise that puts the spotlight on buffalo wings. With more than 70 locations nationwide currently operating or in various stages of development, the burgeoning franchise recently secured itself a top spot for the second consecutive year on Restaurant Business Magazine’s “Future 50” list of the fastest-growing U.S. mid-size restaurant chains. Entrepreneur magazine also named East Coast Wings & Grill one of the nation’s top franchise investments, and Franchise Times magazine ranked the company No. 395 on its “Top 200+” list of top revenue-producing U.S. franchises. The concept has also been recognized by The Franchise Grade and Franchise Business Review for transparency during the franchise sales process, franchisee support and overall franchisee satisfaction. Based in North Carolina, East Coast Wings & Grill caters to chicken wing lovers by offering dozens of varying chicken wing flavors that can be paired with nine heat intensities—resulting in hundreds of delicious choices. The extensive menu also includes salads, wraps, sandwiches, burgers and more – all using fresh ingredients. For more information about East Coast Wings & Grill or its franchise opportunities, visit www.eastcoastwings.com or www.eastcoastwingsfranchise.com.