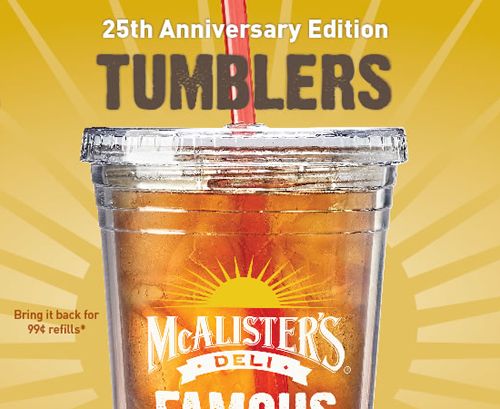 McAlister’s Deli, a leading fast casual restaurant, is celebrating its 25th anniversary this summer. Through Aug. 15, the award-winning chain will offer new, limited-time tumblers at all participating locations across the country. In addition, guests can enter McAlister’s 25th Anniversary Sweepstakes for a chance to win $25 gift cards and the grand prize — a trip to Atlanta and dinner with McAlister’s executive chef, David Groll.*

With the purchase of each anniversary tumbler, guests will receive a 25th Anniversary scratch-off ticket.** Twenty five lucky Tea Freaks will instantly win a $25 McAlister’s gift card. Guests can also enter online at www.facebook.com/teafreaks, where an additional 25 random winners will be awarded. All 50 winners will be entered to win the grand prize weekend trip to Atlanta.

“We want to thank our loyal fans across the country for supporting McAlister’s over the past 25 years by rewarding one lucky Tea Freak with the ultimate grand prize — the chance to taste new menu items in our test kitchen in Atlanta as well as dinner with our chef,” said McAlister’s Deli Chief Marketing Officer Donna Josephson.

Technomic recognized McAlister’s twice in its Chain Restaurant Consumers’ Choice Awards — in 2014 as the top kid-friendly fast casual chain and in 2013 as the top fast casual chain for food and beverage. Nation’s Restaurant News named McAlister’s the top limited-service sandwich chain in its 2014 Consumer Picks Survey. FastCasual.com also recognized the brand on its “Top 100 Movers and Shakers” list of 2014 and named McAlister’s President and CEO Frank Paci one of the “Top 25 People” in the industry to watch.

Founded in 1989, McAlister’s Deli is a fast casual restaurant chain known for its sandwiches, spuds, soups, salads, desserts and McAlister’s Famous Sweet Tea. In addition to dine-in and take-out service, McAlister’s also offers catering with a selection of sandwich trays, box lunches, desserts, a hot spud bar and more. With numerous industry accolades, the McAlister’s brand has more than 325 restaurants in 24 states. The company has corporate offices in both Alpharetta, Ga., and Ridgeland, Miss. For more information, visit www.mcalistersdeli.com.

* NO PURCHASE NECESSARY TO PLAY OR WIN A PRIZE. A PURCHASE WILL NOT INCREASE YOUR CHANCES OF WINNING.  OPEN TO LEGAL RESIDENTS OF THE FIFTY (50) UNITED STATES AND THE DISTRICT OF COLUMBIA (EXCLUDING RESIDENTS OF PUERTO RICO AND US TERRITORIES AND POSSESSIONS) WHO ARE AT LEAST 18 YEARS OF AGE. VOID WHERE PROHIBITED OR RESTRICTED BY LAW. PROMOTION STARTS JULY 25, 2014 AND ENDS AUGUST 15, 2014. CHECK WWW.MCALISTERSDELI.COM FOR OFFICIAL RULES. Sponsor: McAlister’s Corporation, 4501 North Point Parkway, Suite 100, Alpharetta, GA 30022.