Ever dreamed of getting in on the ground floor of the “Next Big Thing?”

If you are a seasoned restaurant owner-operator ready to ride the wave of a revolutionary fast-casual concept, Pie Five Pizza wants to meet you.

We’re looking for exceptional franchise partners to plant our flag in the bustling San Antonio market.  With 12 restaurants and growing in our Dallas/Fort Worth backyard, new company-owned stores on the way in Houston and a world-class franchisee preparing to launch the first of a dozen units in Austin, we’ve set our sights on San Antonio next.

Pie Five’s franchise team is scheduling appointments with prospective franchisees for November 19 and 20 in San Antonio.  Interested individuals or operating groups are invited to contact Mark Ramage at mramage@pihq.com or call 1-800-284-3466 today.

Pie Five has been named a 2013 Top 50 Restaurant Brand of the Year, a 2012 Hot Concepts winner by Nation’s Restaurant News and one of “10 Hot New Restaurant Chains from Established Brands” by Forbes.com.  Pie Five’s CEO Randy Gier was named one of the 2013 “Top 10 Trendsetting Executives in Pizza” by Pizza Marketplace.

“We’ve done our due diligence in San Antonio, and the market is ripe for the Pie Five concept,” said Madison Jobe, chief development officer for Pie Five Pizza Co., a subsidiary of Pizza Inn Holdings, Inc. (NASDAQ: PZZI).  “All we need now is the right partner that’s passionate about our brand and eager to apply our proven formula for success to transform the way people eat pizza in the Alamo City.”

At Pie Five, guests can choose from more than a million combinations of handcrafted pizzas and a variety of specialty pie choices prepared in less than five minutes on one of four crusts.  The rapidly expanding chain is capitalizing on growing consumer demand for fresh dining options and artisan pizzas in stylish environments without the wait. 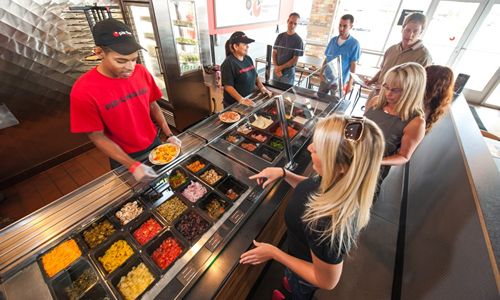