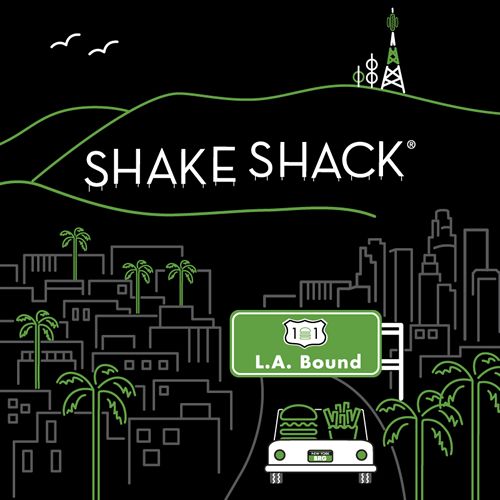 The City of Angels’ first-ever Shake Shack is slated to arrive in 2016. The highly anticipated Los Angeles Shack will land in the heart of West Hollywood at the corner of Santa Monica Boulevard and West Knoll Drive, one block west of La Cienega.

“We’ve heard from our West Coast fans for years that they’d love a Shake Shack in California, and at long last, we’re delighted to say Shake Shack LA is on its way,” said Randy Garutti, Shake Shack CEO. “Los Angeles is one of the greatest cities in the world with a culture like no other, and we look forward to being a part of the community.”

The architecture of the first LA Shack will build on Shake Shack’s history of creating restaurants with leading-edge design.  Harkening back to its heritage as a “roadside” stand, the Shack will have dedicated parking and a large outdoor patio. Located at 8520 Santa Monica Boulevard, West Hollywood, the freestanding Shack will be designed by Michael Hsu Office of Architecture. In keeping with Shake Shack’s commitment to green architecture and eco-friendly construction, the new location will incorporate a variety of recycled and sustainable materials and features energy-efficient kitchen equipment and lighting.

After more than a decade since Shake Shack was born in New York City’s Madison Square Park, it is proud to announce its plans to land in California.

The future’s so bright, SoCal.