Blaze Fast-Fire’d Pizza, a pioneer of the fast-casual build-your-own artisan pizza category, will soon open a location in Rolling Hills Plaza at 2625 Pacific Coast Highway in Torrance, California. Scheduled to open in late May, the new 70-seat, 2,500 square foot Blaze Pizza location will feature a “casually hip” design along with its signature assembly line format and blazing-hot open-hearth oven.

The addition of the Torrance store is part of an aggressive plan to build 25 Blaze Pizza stores in Southern California by the end of 2014. The Torrance restaurant is the first location to be announced by Rolling Hills BP, LLC under a recently signed five-store franchise development agreement. Blaze Pizza is currently in final lease negotiations for four additional Los Angeles-area locations and is actively filling its pipeline with more restaurant sites to keep up with franchisee demand.

“We’re thrilled by the positive response our concept has received, and are excited to be opening more locations,” said Elise Wetzel, president of Blaze Pizza. “We’re looking forward to announcing future expansion into markets beyond Southern California, as we partner with select franchisees to roll out Blaze Pizza across the country.”

Blaze Pizza uses an assembly line format (similar to Chipotle Mexican Grill) to create artisan pizzas at lightning fast speed — all for only $6.85. Each Blaze Pizza restaurant makes its own dough from scratch using a recipe that requires a 24-hour fermentation period to produce its signature light-as-air, crisp crust. Guests watch as each perfectly proofed dough ball is pressed into a generous 11-inch crust. Next, they travel down the assembly line to “co-create” a signature pizza or design one of their own — with over 40 artisanal toppings to choose from. Pizzas are “fast-fire’d” in a blazing-hot oven and ready in a scant 120 seconds. Blaze Pizza’s menu also features signature salads, fresh lemonades, craft beer & wine and house-made S’more Pies. For pizza fans with specific dietary needs, Blaze Pizza offers gluten-free dough and vegan cheese. 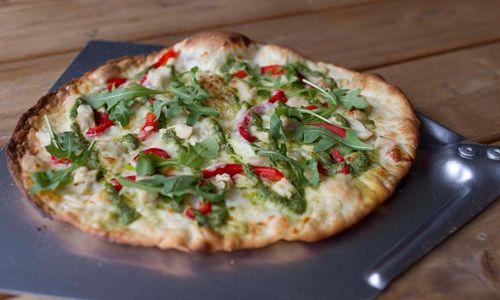