McAlister’s Deli, a leading fast casual restaurant, announced today its first location in Pooler, Ga., will open on Monday, July 14 at 405 Pooler Parkway, Suite 300. The new restaurant is owned by DMAC 81, LLC, which currently operates four McAlister’s in Ga., five in Fla. and six in S.C. In addition, they have development plans to open additional units in the Savannah area and Myrtle Beach, S.C. over the next few years.

“We are excited to open the first McAlister’s Deli restaurant in Pooler,” said Dale Mulvey, owner of DMAC 81, LLC.  “We have been searching for the right opportunity to join the Pooler community for a very long time, so this is especially exciting for our team. We are confident that local residents will enjoy our wide variety of sandwiches, giant spuds, soups and salads and McAlister’s Famous Sweet Tea.”

Technomic recognized McAlister’s twice in its Chain Restaurant Consumers’ Choice Awards – in 2014 as the top kid-friendly fast casual chain and in 2013 as the top fast casual chain for food and beverage. Nation’s Restaurant News named McAlister’s the top limited-service sandwich chain in its 2014 Consumer Picks Survey. FastCasual.com also recognized the brand on its “Top 100 Movers and Shakers” list of 2014 and named McAlister’s President and CEO Frank Paci one of the “Top 25 People” in the industry to watch. 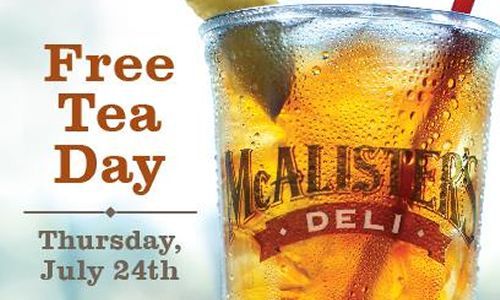 Founded in 1989, McAlister’s Deli is a fast casual restaurant chain known for its sandwiches, spuds, soups, salads, desserts and McAlister’s Famous Sweet Tea. In addition to dine-in and take-out service, McAlister’s also offers catering with a selection of sandwich trays, box lunches, desserts, a hot spud bar and more. With numerous industry accolades, the McAlister’s brand has more than 325 restaurants in 24 states. The company has corporate offices in both Alpharetta, Ga., and Ridgeland, Miss. For more information, visit www.mcalistersdeli.com.