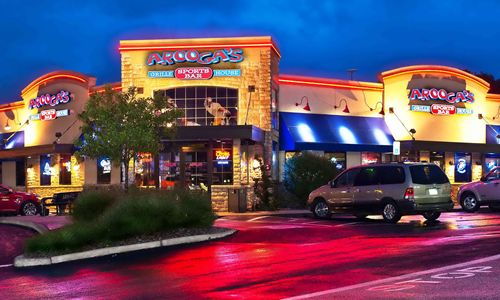 With Arooga’s having the best year in its history, from national and local awards to franchise development agreements, its leader is being shown some love as well.

Gary Huether, Jr., co-founder and president of Arooga’s Grille House & Sports Bar, has been named one of Central Penn Business Journal’s Forty Under 40. The program, which is celebrating its 20th anniversary, recognizes the region’s shining stars for commitment to business growth, professional excellence and community service.

On Monday, October 27, Huether, Jr. along with 39 of the area’s best will be recognized at an evening reception and awards program at Hilton Harrisburg from 6:00 – 9:00 pm. Following the event, Huether, Jr. and other award recipients will be featured in the October 31 edition of the Central Penn Business Journal. The list of winners will also appear in the 2015 Book of Lists publication.

“For me, it’s always about Arooga’s,” said Huether, Jr. “That said, I am humbled by the recognition and on behalf of the brand, I’m honored to be included in such a special group of people, all of whom are dedicated to making Central Pennsylvania the very best it can be.”

Arooga’s recently celebrated its sixth anniversary. Under Huether, Jr.’s leadership, Arooga’s was selected as America’s Next Top Restaurant Franchise in a nationwide search to find an independent restaurant to become the next great franchise.  The brand also entered into a franchise agreement with The Mohegan Tribe that will nearly triple the brand’s overall footprint. Staying true to his roots, Arooga’s will open another Central Pennsylvania location this fall in Shippensburg.

Gary is Baltimore-born, but Central Pennsylvania raised, growing up in Mechanicsburg and graduating from Trinity High School in Camp Hill, Pa. Ever ambitious, Gary attended college while working full time for Snap-On Tools, and quickly transitioned into the role of franchise owner, eventually owning several franchises by the young age of 21. He was 25 when he was presented with an opportunity to take over ownership of a local bar in Harrisburg where he rediscovered his passion for restaurants, and he hasn’t looked back since.

For more information about the Forty Under 40 awards program, the complete list of honorees and/or to register to attend the awards reception, visit www.CPBJ.com/events or contact Jami Marsicano at jamim@cpbj.com or 717-236-4300