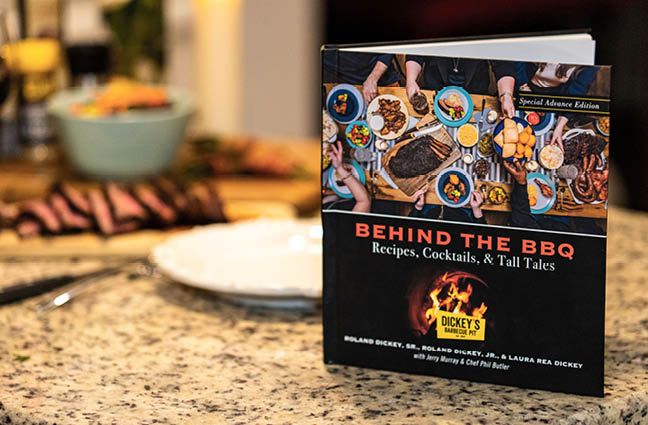 In partnership with Southwestern Publishing House, Inc., Dickey’s Barbecue Pit’s “Behind the BBQ: Recipes, Cocktails & Tall Tales” is now available for purchase on BarnesandNoble.com. The perfect addition to your cookbook collection – just in time for summer grilling, your backyard barbecue and the upcoming football season. You can read into the Dickey’s family and how the dynasty was passed down from generation to generation. Get exclusive access to their family traditions and recipes from appetizers, entrees, desserts, drinks and more!

The cookbook is an ode to barbecue lovers, pit masters, Big Yellow Cup collectors, and all the folks who have made Dickey’s the iconic brand that it is today. Dickey’s prides itself as an American, family-owned barbecue restaurant brand that serves authentic mouthwatering barbecue with a side of southern hospitality. Dickey’s is letting its loyal fans bring some of its southern charm and delicious tastes home with them – including favorite recipes from Dickey’s family members, employees, franchise owners, and more.

Behind the BBQ is more than just a cookbook featuring exclusive, behind-the-scenes tales of life at Dickey’s that fans won’t hear anywhere else. The cookbook was recently recognized by both the IBPA Benjamin Franklin Award program & Hermes Creative Awards bringing home coveted Gold awards for each.

“Behind the BBQ” transports Dickey’s stories, recipes and spirit from our table to yours,” said Laura Rea Dickey, CEO of Dickey’s Barbecue Restaurants, Inc. “We are thrilled to offer our fans and barbecue fanatics another convenient way to get their hands on the best barbecue recipes, specialty cocktails and delightful appetizer recipes to host a truly one-of-a-kind party this summer!”

With Behind the BBQ, cooking by the book has never been easier. Become a pro in the kitchen and a grill master of your own backyard barbecue with our quick and easy-to-follow recipes in our meat eater cookbook! You can also visit Barbecue At Home website or Amazon to get your hands on our cookbook filled with authentic recipes, passed down from 3 generations of the Dickey’s family!

Dickey’s Barbecue Restaurants, Inc., the world’s largest barbecue concept, was founded in 1941 by the Dickey family. For the past 80 years, Dickey’s Barbecue Pit has served millions of guests in 44 states Legit. Texas. Barbecue. At Dickey’s, all our barbecued meats are smoked onsite in a hickory wood burning pit. Dickey’s proudly believes there’s no shortcut to true barbecue and it’s why our name isn’t BBQ. The Dallas-based, family-run barbecue franchise offers eight slow-smoked meats and 12 wholesome sides with ‘No B.S. (Bad Stuff)’ included. Dickey’s Barbecue has 550 locations across the United States and eight other countries.