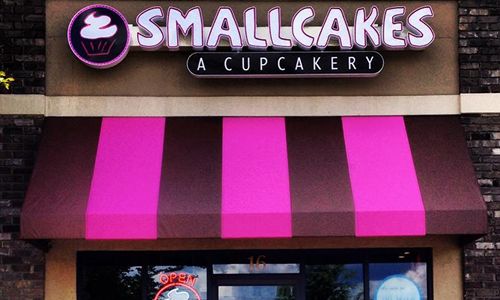 There’s a new but familiar dessert in town – decadent, gourmet cupcakes.  Smallcakes: A Cupcakery, a wildly popular international cupcake brand, is set to open a location in Kirkwood at 343 S. Kirkwood Road in mid April.  Kirkwood will be the first franchise in the St. Louis area.

“I couldn’t be more excited about bringing Smallcakes to the great city of St. Louis,” says Jeff Martin, founder of Smallcakes: A Cupcakery. “Being rooted in Kansas City with several locations throughout Kansas and Missouri, we already have many loyal cupcake fans in the area. We’ll be able to offer our delicious desserts closer to home right from the kitchen of your neighborhood cupcakery.”

Martin launched Smallcakes in 2009 and the company has since grown to over 60 locations offering specialty cupcakes baked fresh daily. Martin and Smallcakes have received national acclaim with his three appearances on the Food Network’s Cupcake Wars, a feature on the morning television show The View, catering cupcakes to star-studded events such as the MTV Video Music Awards, and being listed as one of the Top Ten Cupcake Places to try in the country by USA Today.

The Kirkwood franchise is owned and operated by area locals Steve and Vonnie Shepard.

Smallcakes Kirkwood will be open 7 days a week from 10 a.m. to 8 p.m. Monday through Saturday and 12 noon to 5 p.m. Sunday. For more information visit Smallcakes online at www.smallcakescupcakery.com and on Facebook.